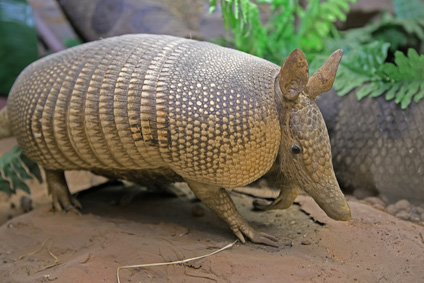 How do I know if I have Armadillos?
The signs of having Armadillos may include tunnels under the foundation of your home (Burrows) and several dozen golf ball size holes throughout your yard. Armadillos are prolific diggers, they use their sharp claws to dig small holes in your yard looking for food which can cause severe damage or completely kill your lawn. Their food sources Include: grubs, beetles, caterpillars, and berries and they often feed in groups big enough to destroy a lawn in a few nights. Armadillos are primarily nocturnal using their keen sense of smell to locate food, so you will seldom see them except at dawn or dusk.

How do I get rid of the Armadillos?
The only effective way to remove armadillos from your yard is to catch them in live catch traps and remove them from your property. This may prove to be more difficult than it seems. Armadillos are one of the more difficult animals to capture due to their very sensitive sense of smell. Baiting them is not an effective method of getting them to enter a trap.

Ensure the trap is placed on a level area. Place some type of bark, pine needles, or mulch in the bottom of the trap in order for the Armadillo to feel like it is on natural terrain. Traps must be placed on active trails they are using and must be concealed to blend in with the trail along with any foreign smells. Always remember to wear gloves when working with your traps as this will help to control contamination of the trap by your scent. The best trap to use is a double-ended trap such as a “Havaheart” which has an opening on each end. Traps must be in the travel lanes of the Armadillos and camouflaged to where the animal is not afraid of the trap.

The home range of an Armadillo's troop is approximately 5 miles in circumference, so it will be important to understand that they may be active in your yard and suddenly disappear only to return a few weeks later. Armadillos will have several burrows and feeding areas. They will travel from burrow to burrow in cycles hunting for food. Once the food in one area is depleted, the troop will move on to another area. This is an animal you can have success trapping on your own but I recommend you count the costs you will incur along with the amount of time it may take to figure out how, when and where to place traps. They are one of the most difficult animals found in residential areas to trap.

What do I do if I catch an Armadillo?
Should you be lucky enough to catch an armadillo, you must be careful when handling them due to the fact they are known to carry diseases such as Leprosy. Always wear gloves and a mask when handling Armadillos. Once an Armadillo is captured, it is Illegal in the state of Florida to release it back into the wild. The animal must be euthanized, and disposed of properly in accordance with Federal, State, and County ordinances. http://myfwc.com/wildlifehabitats/profiles/mammals/land/armadillo/. Due to the hazards of handling Armadillos, it is recommended that you call a licensed and experienced trapper to handle the Armadillo.

Q.  How can I tell if there are Armadillos in my yard?
A. There will be small holes dug in your yard where the Armadillos are looking for insects and worms to eat.
Q.  What are the tunnels under my patio or foundation of my house?
A. Armadillos dig several burrows in an area where they are feeding. This allows them to be near their food source and
breach area where they and their young will have their own secure resting place.
Q.  Are Armadillos dangerous?
A. Armadillos have sharp claws and can jump up to 4 ft. high. People have had to seek immediate medical treatment
after being scratched by them. Armadillos are also the cause of one third of the Leprosy cases reported each year.