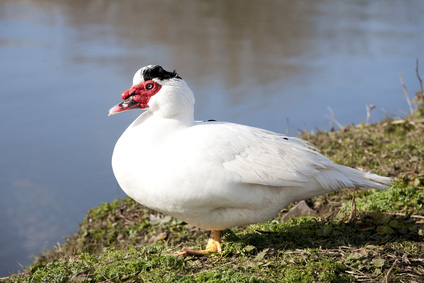 How do I know if I have Ducks and/or Geese?
Ducks/Geese are often introduced into neighborhoods by people who think they will be a nice addition to their pond or lake, but do not consider what happens when they breed and their numbers increase to an unmanageable number. Ducks and geese can become aggressive when you are near their nest or feeding areas. The manicured lawns, golf courses, and secluded neighborhoods provide food and a safe place to raise their young. Wild native ducks and geese are very wary of human contact and will flee if you approach them. Often times, the ducks which are causing problems are the Muscovy duck.

Muscovy ducks are listed as an invasive species by the Federal Fish and Wildlife Commission. Invasive species are animals not native to the United States. Muscovy ducks originated in China and were brought to America as a captive food source. Some of the original captive ducks escaped and bred in nature where they have destroyed the native duck population. Muscovy ducks will often destroy the eggs in a nest and replace them with their own eggs leaving the ducklings to be raised by the native species whose nest they raided. The droppings that Muscovy leave behind are rich in salmonella and other bacteria which can easily be spread to humans and brought into your house unknowingly if you step in it in your yard or driveway.

How do I get rid of Ducks or Geese?
Ducks and geese can be difficult to catch. There is no trap that they will enter so catching them has to be done with a net or by hand.  When you are catching ducks and geese you need to watch for three (3) things: their wings, beaks and feet. Ducks and geese can use their wings as bats. Wings are bones covered in feathers. It may not sound dangerous, but they are hard, move at high speed, and can inflict enough force to knock you unconscious. Ducks and geese can bite with their beaks, and will often strike for your eyes. This is their defense mechanism. Ducks and geese have sharp claws on their feet that can cut you, and if not cleaned properly, the cut can get infected.

What do I do with any Ducks or Geese I catch?
Once you capture the Duck or Goose, the fun begins. In order to keep them from running or flying away, they must be placed in a cage, canvas bag, or a mesh bag. This will allow them to breath and move but will restrict their movement to where they are manageable. Depending on the type of duck or goose you find, it may require releasing them, clipping their wing and relocating them, or euthanizing them.  Learn More>>.

Once you have removed the troublesome waterfowl, now comes the cleanup process. Any duck or goose feces you find on your sidewalk or driveway should be washed away with bleach and water. Look around your property, especially places like flower beds, the edges of ponds, and any high grass, for the nest of the ducks and geese. Mating Ducks and geese use pheromones and scents to mark their territories and nest. Start by destroying the nest by completely removing all of the eggs and feathers. This will help to dissipate the smell and make it easier to use a disinfecting deodorizer - “ammonia or bleach” may be used, but may kill your grass.

Q. Why are ducks and geese bad for my neighborhood?
A. Ducks and geese are not native to this area. Being here throws off the balance in the ecosystem, by their consumption of
native plants, and defecation in walkways and yards.
Q. Should I feed the ducks and geese?
A. No. Iin fact, feeding wild animals is actually illegal in the State of Florida. It teaches the animals to depend on people
for food.
Q. Do the ducks and geese carry diseases?
A. Ducks and geese leave their droppings everywhere they walk, and in their feces are salmonella, bacteria, and viruses.
These are picked up on your shoes and easily tracked into your home or office where you and your family walk
barefoot, and where you children crawl around and play.
Q. Are ducks and Geese aggressive toward humans or pets?
A. Yes. When humans or pets get near a nest or feeding area, the dominate male in the group will attack in an effort to
keep its flock safe.